TAKING BACK WHAT’S OURS: ACHIEVING JUSTICE IN THE TIME OF COVID-19

Abstract
On Human Rights Day, join us as we hear and celebrate the stories of success and empowerment of our migrant workers! As part of the Migrants' Month Calendar of Activities of the Justice for Wage Theft Campaign, we will be joined by advocates and returnees who will recount the stories of migrant workers who experienced wage theft during COVID-19, how they were able to achieve justice in the time of pandemic and claim back their wages as well as how they were able to empower themselves despite the challenges confronted. The event is open to all. It will be held on Human Rights Day, 10 December 2021 at 6:30PM via Zoom. Register via this link: https://bit.ly/3Inr6eK See you there! 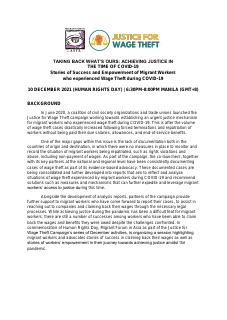