Abstract
For immediate release/ Manila, 30 June 2021 — Migrant Forum in Asia (MFA) members and partners have together launched the second volume of the bi-annual analysis report, “Crying Out for Justice: Wage Theft Against Migrant Workers during COVID-19” which documents cases of wage theft from the period of January and May 2021. The report marks the first anniversary of the Justice for Wage Theft campaign. A joint effort by a large coalition of trade unions and civil society organisations inaugurated on 1 June 2020, the campaign calls for an urgent justice mechanism for migrant workers repatriated due to the COVID-19 pandemic without being paid their due wages, salaries, and end-of-service benefits. More than a year after the pandemic, up to millions of migrant workers are still anxiously waiting for their wages, as there has been hardly any progress with respect to access to justice. 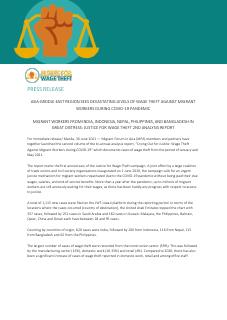